Category Archives: My God is the Lamb

John 1:29 – The next day John saw Jesus coming toward him and said, “Look, the Lamb of God,who takes 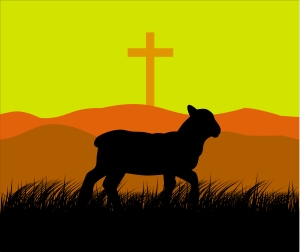 away the sin of the world!”

John the Baptist bears witness to Jesus being the Christ

John the Baptist had a lot of followers. He was a well-known and respected Jew. He was a teacher and leader. So much so many people of the day thought that he might be the Christ. John the Baptist was always quick to point them away from himself and back towards God. He loved the Lord and knew that he would one day meet God.

Look the Lamb of God

In these times in Jewish history, lambs were common place. The lamb was used in meals, festivals and as sacrifices. There are many different theories on what John the Baptist meant when he said “Lamb of God” in reference to Jesus. I don’t claim to be a scholar or theologian, but I have always thought that in this instance that John was pointing to Jesus as the Messiah. The one who was sent to save the people of Israel. Whether it was as a triumphant lamb, sacrificial lamb, passover lamb or whichever, John the Baptist was clear that this was the Messiah. This is the one who was more important than him. He was the one who they had been anticipating. In verse 30 it reads, “This is the one I meant when I said, ‘A man who comes after me has surpassed me because he was before me.’” Those who were following John knew that John had been sent by God. He was the closest they had ever seen to the Messiah. Many kept asking him if he was the Messiah. John would remind them, that there was one who would come after him who was the Messiah.

This whole section of scripture is amazing, because we get a first hand witness to Jesus. Someone who saw Him, confessing that He is the messiah. Clearly telling people this is the one that is more important than him. Why does this matter? It’s one more piece in the puzzle of our faith. We have witnesses telling us the truth about Jesus. John the Baptist was well respected. His word was not in question. That’s why it mattered that he was the one bearing witness to Jesus.

Selflessness – to God be the Glory

One of the things that I love about this verse is the way John the Baptist gives us an example of always pointing back to Jesus. Everything we do should be a reflection of our lives in Christ. The way we behave, the words we choose, the kindnesses we share are all opportunities to shine for Jesus. Pointing back to Him as the one who is greater than us. John the Baptist was doing that in these verses from John. He says, I’m not great, God is great. Now that Jesus was on the scene, John the Baptist was pointing people to Jesus. He wasn’t worried about the fact that his followers were now following Jesus. He was glad. He knew that Jesus was the one. The one true “Lamb of God”.

Who takes away the sin of the world

This is an amazing part of the verse. It shows that John the Baptist truly knew what the goal of Jesus was here on earth. That Jesus was truly the Messiah sent to take away the sin. Like the sacrificial lamb or the passover lamb, Jesus was going to be sacrificed, shedding His blood on the cross so that we wouldn’t have to suffer after death. What a blessing to have John the Baptist as a witness to our Lord. We can use his strong testimony to strengthen our faith. We can stand assured of Jesus role in our salvation.