Psalm 145:2-4
Every day I will praise you and extol your name for ever and ever. 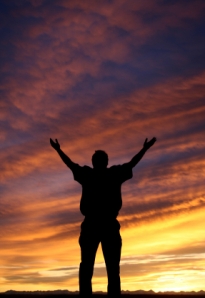 Great is the Lord and most worthy of praise;
his greatness no one can fathom.
One generation commends your works to another;
they tell of your mighty acts.

1 a : having worth or value : estimable
b : honorable, meritorious
2: having sufficient worth or importance

Worthy. What makes someone worthy? I think I have ranted on before about being deserving, how I don’t like it when good things happen and people say, “They really deserved it.” It is hard for me to rank people according to their worthiness. I believe no one on earth is worthy of anything, except death. We are all sinners, and the wages of sin is death. So who is worthy? God alone is worthy of our praise.

Who is your king?

Tuesday night at my women’s Bible study, we were challenged with the question of, “Who is your king?” We had been looking into the verses on the day of Jesus death, and noted the irony of the Jewish leaders in the passage. They said that Jesus was blasphemous, and that’s why he needed to die. They were trying to convince Pilate that Jesus was truly guilty of a crime worth death. Well, Pilate wasn’t sufficiently convinced, so what did they do? They did just what they accused Jesus of doing…blasphemy. They said that Jesus claimed to be king, and that anyone who claimed to be king was against Caesar. This wasn’t the blasphemous part, but that’s what came next. In John 19:15, Pilate asked, “Shall I crucify your king?” and the chief priests responded with, “We have no king but Caesar.”

We debated for a little bit about whether or not this was really blasphemy. Wasn’t calling Caesar king like us saying we have no president but Barack Obama? Fortunately we have Lynn in our group, who attended seminary. She explained to us that the difference is that the Romans of the time considered Caesar to be a god. They burned incense to him, and praised him like a god. So the chief priests saying that they have no other king means they were putting Caesar above God and hence they were guilty of blasphemy.

Having sufficient worth or importance

His greatness no one can fathom

The psalmist backs up his statement of God being worthy of praise with this statement, “His greatness no one can fathom.” In the old testament, they had seen some amazing things that the Lord had done. Maybe they even had a clearer idea of the greatness of God. But God is still at work in our midst. He is still great and worthy of praise.

One generation commends your works to another;
they tell of your mighty acts.

I think one area that I as a Christian parent and a person with influence over my friends children should work on, is pointing out the amazing work God is doing in our lives today and yesterday. We have an opportunity to help the next generation know God more through our testimony of how He has worked in our lives. Can you think of some mighty acts that the next generation should hear about from you?

Here are some of mine:

1. My husband is a Christian. When I met him, he didn’t really confess any sort of faith, but the Holy Spirit worked in his heart and now he is a strong Christian man, living for the Lord. GOD IS WORTHY OF PRAISE

2. My son, who was born with a heart condition, Tetrology of Fallot, had surgery when he was nine months old, and now is expected to never need another surgery for that condition (which others often have many). GOD IS WORTHY OF PRAISE

3. My Multiple Sclerosis doesn’t affect the quality of my day-to-day life. GOD IS WORTHY OF PRAISE

4. God has provided for us when it looked like there was no way to get through another day. GOD IS WORTHY OF PRAISE

5. The Lord has provided the right jobs for me at the right time. GOD IS WORTHY OF PRAISE

6. Despite moving many times, the Lord has provided me with a support system of Christian women. GOD IS WORTHY OF PRAISE

What is of worth or importance to you?