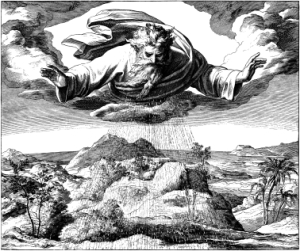 the Lord is robed in majesty and armed with strength;
indeed, the world is established, firm and secure.
Your throne was established long ago;
you are from all eternity.

God is in charge. If you want to talk to the man at the top, God is your man. He’s the go to guy for any situation. If you want answers, He’s got them. If you want justice, He provides it. If you want security, He’s your God. He fulfills everything we need. No matter whether we acknowledge Him or not, He reigns.

He is robed in majesty

1: sovereign power, authority, or dignity
2—used in addressing or referring to reigning sovereigns and their consorts <Your Majesty> <Her Majesty’s Government>
3a : royal bearing or aspect : grandeur
b : greatness or splendor of quality or character
When we look at the phrase, “robed in majesty” I immediately pictured a king in his fanciest of robes. But to be robed in something is a bit different, I think. Robed means, “to clothe or cover with or as if with a robe”. It’s not the robe itself, but instead being covered with something. I think in the example of our verse above, it means that God has majesty all over Him. He’s got that sovereign power, authority, and the dignity only God can have, and it’s all over Him. His greatness and splendor is in every part of Him. He’s covered in it. He’s robed in it.
So why does it matter if God is robed in majesty?
I think the point of describing God as robed in majesty is to point out that He is God. He has supreme authority over all that happens. He has been around for all eternity and uses His strength for our good. Why does He have this supreme authority? This sovereign power? The author of our verses give us a couple of reasons. The first reason, “the world is established, firm and secure,” is like saying, you made all of this, and clearly you knew what you were doing, because each part of the world works off and with all of the other parts. There is no detail God has not created. In addition to being the majestic creator, the author also mentions that God’s  “throne was established long ago” and that God is “from all eternity.” God knows more, has seen more, understands more because He has seen it all. Literally. There is nothing that has been hidden from God. He has been present for every moment of every life.
The Lord is robed in majesty and armed with strength
Not only does God have the supreme authority, but He’s got the strength to back it up. He doesn’t have someone else fighting His battles for Him. He’s able to fight off all the evil in the world, and guess what the devil and all his minions have to listen. Why because God is robed in His majesty – God has the sovereign power, and He has had it since before the world began. We can trust our wants, needs and dreams to Him, because He has the power and strength to back up all His claims. His love for us allows us to lean on Him in all circumstances. Praise God!

Posted by Jill Richard on March 25, 2013 in My God is Robed in Majesty, Psalm